Today would have been Zoey’s 13th Gotcha Day.

She was a stray that showed up one day at my husband’s business…a garden center.  No one knew where she came from. Perhaps she got lost from her home…maybe she was dumped there. But she was scared and alone. I remember my husband mentioning to me that there was a young cat hanging around the store. I didn’t think much about it at the time thinking the cat would probably move on.

But she didn’t leave. She was seen dumpster diving searching for something to eat, so the employees would throw her their leftovers. One of her favorites was Boston Market chicken. She was there for several months…and when winter came, they built her a shelter where she could get out of the cold and snow. But then it got bitterly cold. I remember there were sub-zero temps that February. And again my husband mentioned to me that the cat was still hanging around. At that point, I told him we had to try trapping her and get her inside someplace warm. 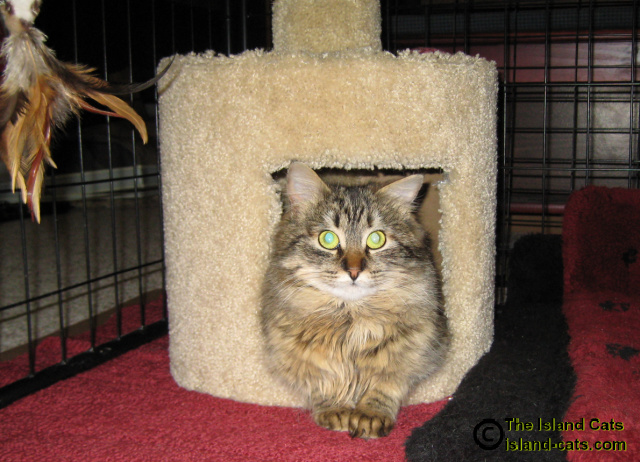 One of the first photos I took of Zoey

I called several rescue groups in our area asking if they could help trap her and perhaps provide her with a foster home. But no one had room. One group, PAWS of Michigan, offered me a live trap to use.

It was a sunny but cold and very snowy Saturday morning when I set out the trap hoping to lure her in. I was warned that it might take several days to trap her. It only took 10 minutes. Zoey…though she was nameless at the time…stepped into that trap to get the food inside, and with the bang of the door shutting, her life…and mine…were changed forever.

Initially we kept her in a large dog crate at the garden center until we could figure out what we were going to do with her. She was not happy being in that cage and lunged at anyone who came near. We knew getting her fixed was the first step. So I called around to some local veterinary clinics and found one willing to take a somewhat wild cat. The vet estimated her age around 9 or 10 months. After getting her fixed, we decided to bring her home.

Honestly, I wasn’t keen on taking in another cat. I already had Wally and Ernie who got along well and I didn’t want to rock the boat. But with no foster home available, the only other place for her was a shelter. Given her fearfulness and aggressive behavior, she would have never survived there. We kept her in the basement at first (it was finished and very nice), and then later moved her to a bedroom to start the introduction process. 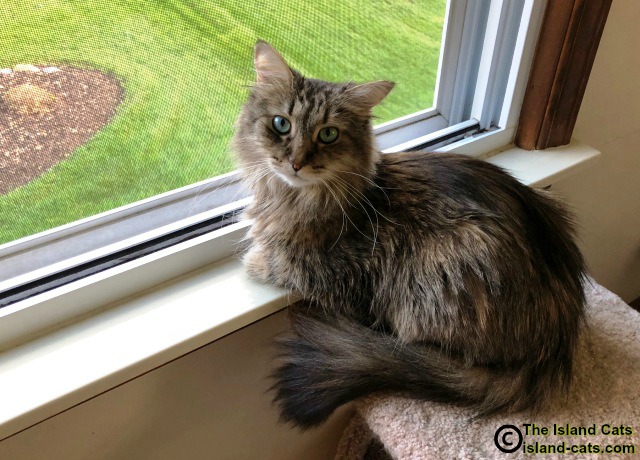 She loved sitting in the window

Introducing Zoey to Wally and Ernie did not go well. She was afraid of them and lashed out. I tried everything…I read many articles and books about introducing cats to one another, consulted two different animal behaviorists. But nothing worked. I don’t know…maybe I tried too hard. I really wanted it to work out. But I’ve learned that some cats just don’t get along. Zoey and Wally were two of those cats. 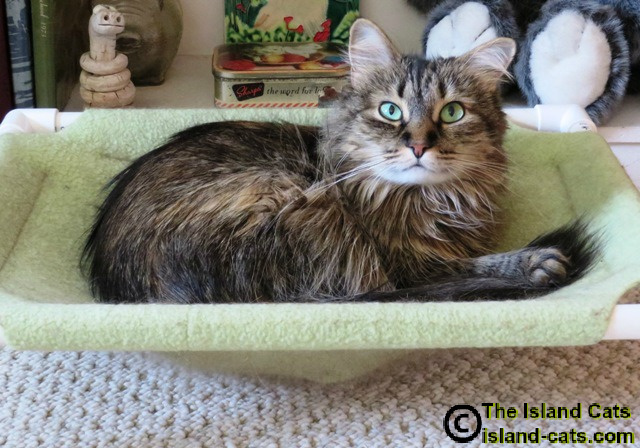 Lounging in her “hammick”

Eventually we fell into a comfortable routine. Zoey stayed in her room most of the time. I think she liked having her own space. She had a comfortable bed to sleep on, a big window to watch the goings-on in the neighborhood, and lots of toys. She felt safe and secure there.

Zoey remained a shy and fearful cat. She hid from people…even me and my husband sometimes. She would still occasionally hiss at me. I’m sure it was just her way of letting us know she was in charge but, I admit, it was frustrating. She didn’t make it easy to love her. And while she wasn’t the friendliest cat, she certainly was a beauty. Oh those green eyes of hers! 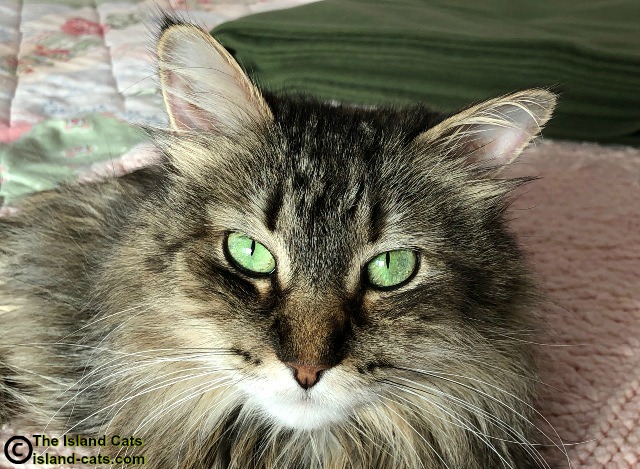 She may not have loved me at first, but I think the two of us did come to an understanding. She knew I was the one taking care of her. “The lady with the yellow hair” as she referred to me. And over the past few years, when she developed health issues which required more care, I saw her mellowing. And our bond grew. 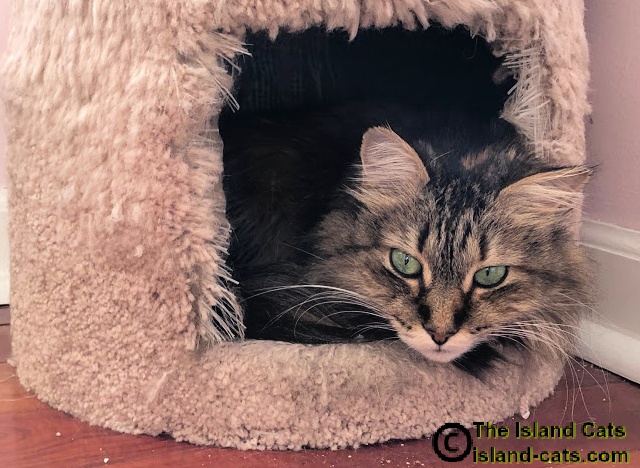 I knew that with Zoey’s health issues, her time with me was unpredictable, but losing her was so unexpected. I miss her sassiness…but I also miss how sweet she could be…greeting me at the door each morning when I brought her breakfast, head butting me nonstop as I brushed her, sitting together as we looked out the window watching the birds and squirrels. It’s funny how a cat I really didn’t want at first could worm her way into my heart and make me love her so much. I miss you, Baby Girl.

42 Responses to “My Green Eyed Girl”