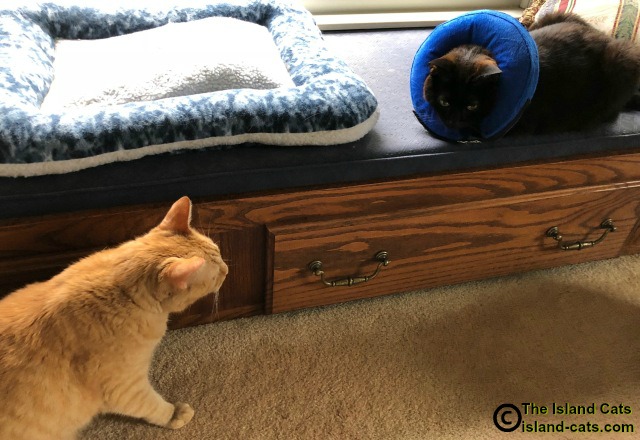 You better stop calling me that, Wally. Y’know…you could find yourself wearing this thing one day, too.

But you look like you’re wearing a big blue donut around your head, Ernie. All you’re missing are the sprinkles.

Well, at least this thing’s better than that lampshade I was wearing. I can see better…and most of all…I can eat better.

Yeah, you looked like an alien in that plastic thing. Now you’re a donut head. Or it looks like a flotation device. If you get thrown into a pool will you float? Heheheh.

Okay, okay…I’ll stop…for now. But seriously, will you float?

That’s one thing I don’t wanna find out, Wally.

Island Cat Mom here. As you can see, Ernie is sporting this new collar that I got him, and it 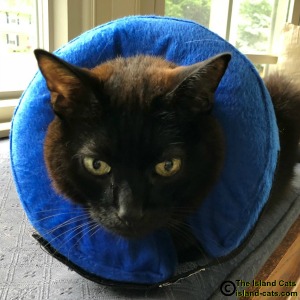 really is more comfortable than the plastic cone. It’s lighter weight and softer. No hard edges like the cone. He maneuvers much easier in it.

Ernie’s doing better. He’s hardly licking at all. He’s only wearing the collar when I first put the ointment on, to keep him from licking it off until it dries…and at night. I still don’t know what triggered this, and we may never figure it out.

Ernie is getting his revenge against me. Around 6 am, he’ll  jump on the bed and headbutt me until I wake up. He hadn’t done this before. And let me tell you, getting hit the head with the plastic cone that early in the morning was not pleasant. The collar is better…but I want him to lose it soon, too. I need my sleep! Thanks for all the purrs, prayers, and good thoughts for him.