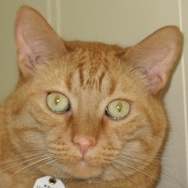 Hey everybuddy!  Wally here.  Awhile back we were contacted by a nice lady from Psychic Source asking if we’d be interested in having a psychic reading done for us. Y’know…I think we’re kinda psychic.  I mean, how else would we know when it’s time to go to the evil v-e-t before the PTU even comes out of the closet?  Or that it’s dinner time before we hear the pop off the top of the can of stinky goodness?

Anyway, the mom thought it would be something fun to do.  She wishes she knew what we were thinking.  This may be one way for her to find out!

I’m gonna let the mom take it from here and tell you about our psychic reading.  Take it away, mom!

Thanks, Wally.  As Wally said, we were offered a free 30 minute reading with a pet psychic and asked to share our experience.  Prior to the telephone call last week, I sent the psychic, Nancy, photos of Wally, Ernie and Zoey.

I’m not really sure how I feel about psychics.  I do believe there are some people who have the ability to connect and “read” people…and animals, too.  But really, how can one connect over the phone and just by looking at photos?  Still, I was curious to hear what Nancy had to say. 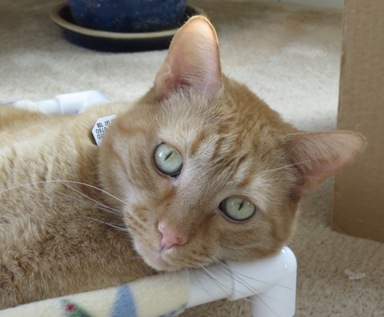 Nancy first spoke about Wally.  She said she sensed he was daring and brave, very confident in himself and that nothing ever scares him.  He is happy and has a real enthusiasm for life. She said Wally is very smart.  He wants to be in charge.

While I may disagree about Wally being so confident, I do agree that Wally sees himself as the leader and needs to be in charge.  Though what I see in Wally is that sometimes, he doesn’t know how to be in charge. 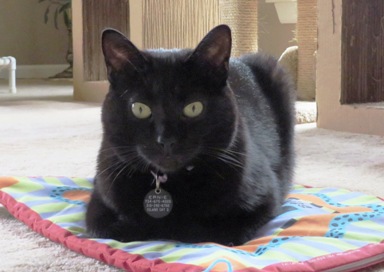 Nancy next spoke about Ernie.  She sensed when Ernie was young, he was around a male person who let things go wrong and didn’t take good care of Ernie.  She said this person abandoned Ernie on the streets…just let him go.  This caused Ernie some confusion, he never understood why he was dumped.  At this point, I told Nancy that this did not jive with what I was told when I adopted Ernie from the shelter.  The shelter people had said Ernie, along with his sister, were given up by their previous owners because they were unable to have pets in the apartment where they lived.

Nancy said this is not what she saw…she believes Ernie and his sister were abandoned on the streets and that’s how they ended up at the shelter.  Ernie was hurt that he eventually was separated from his sister.  Nancy said that even though Ernie had a rough start to life, he feels happy and safe now.

This is very interesting because my husband has always had a similar feeling…that in his early days, Ernie spent some time on the streets.

Nancy also said Ernie has issues with male humans…except for my husband.  Ernie sees him as The Emperor and worships him.  I agree that Ernie loves his “dad-guy,” but he really is a momma’s boy (don’t tell him I said that!).  And I agree that Ernie seems to do better with females than males.

Nancy spoke about the relationship between Wally and Ernie.  She explained that Wally makes it clear to Ernie that Wally is the one in charge.  Ernie lets Wally be in charge because he wants to get along…Ernie is good at compromising.  But sometimes he wants to be in charge, too.  This causes Ernie to demand more attention from me.  And I would have to say that out of all three cats, Ernie does demand the most attention.  Nancy told me that Ernie needs extra loving.  I think I can handle that. 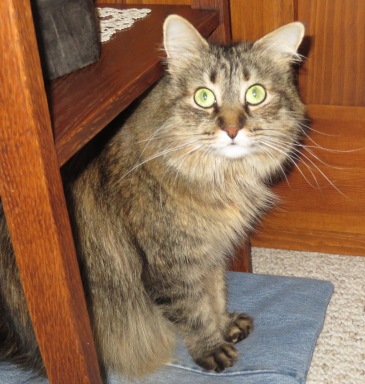 Nancy then turned to Zoey.  The first thing she said is that she saw an angel around Zoey, looking out for her.  I found this comment fascinating.  Most of you may know that we found Zoey as a kitten hanging around my husband’s business.  After about 6 months of hanging around and being fed by the workers, I trapped her, got her fixed and brought her to the island to live.  My husband had a woman working for him that had been diagnosed with breast cancer and, in fact, passed away around this same time.  My husband and I have always felt that Doreen is Zoey’s angel…looking out for her from heaven.

Nancy said that when Zoey was young, life was a mystery to her.  She new there was something more, but she didn’t trust humans.  Even now she only trusts certain humans, like me and my husband.  And I would agree with that.

I asked Nancy about the relationship between Wally and Zoey, since the two of them don’t get along.  She said that Wally is jealous of Zoey because Zoey wants to be in charge and he’s made it clear that he’s the one in charge.  Wally feels that he doesn’t get the respect he deserves from Zoey.  But Nancy did say that if Zoey needed protecting, Wally would definitely protect her.  I’m not so sure about that.

So what are my thoughts about this reading?  I found it fun and fascinating.  I don’t agree with everything Nancy had to say.  But the comments about Ernie living on the streets and Zoey having an angel looking out for her confirmed thoughts that I myself had.

Nancy was pleasant and very easy to talk with.  She has been doing psychic readings both for animals and humans for many years.  If you would like more information about Psychic Source and Nancy, click HERE.

Now for the disclosure:  We received a free psychic reading when we agreed to do this review, but that’s all we got, and our opinions are our own.

52 Responses to “A Psychic Reading”